Paul Samuelson:
ON BEING AN ECONOMIST 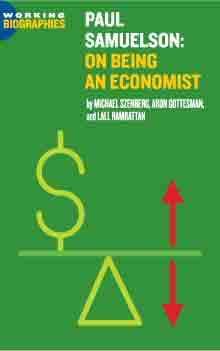 BUY IT AT:
Amazon

The first American to be awarded the Nobel Prize in Economics, Paul Samuelson also wrote the most successful economics textbook ever published. His Foundations of Economic Analysis, which ranks with the works of Adam Smith, David Ricardo, John Stuart Mill and Alfred Marshall, developed a unified field theory of economic activity, and prompted the New York Times to call him the “Einstein of economics.”

He has authored and edited several books, which received awards and were translated into several languages. His Economics of the Israeli Diamond Industry, with an Introduction by Milton Friedman, won the Irving Fisher Monograph Award. The last two books, New Frontiers in Economics, with a Foreword by Paul A. Samuelson, will be published in 2004 by Cambridge University Press and Reflections of Eminent Economists, with a Foreword by Kenneth Arrow, will be published in 2004 by Elgar Publishing Co. The two volumes were co-edited with Lall Ramrattan.

Aron A. Gottesman, Ph.D. is an Assistant Professor in the Department of Finance and Economics at the Lubin School of Business at Pace University in Lower Manhattan. He has a Ph.D. in Finance (2001), an M.B.A. in Finance and Accounting (1997), and a B.A. in Psychology (1994), all from York University in Toronto, Canada.

Gottesman has taught graduate and undergraduate courses on investment analysis, derivative securities, and the theory of capital markets, and has presented corporate seminars on finance and risk-related topics. He has consulted to both private corporations and the Government of Canada in the areas of portfolio analysis, insurance, and banking. He has received a number of awards, research grants, and scholarships, including a research grant and doctoral fellowship from the Canadian Social Sciences and Humanities Research Council (SSHRC). In 2001 he received an award for the best paper on financial institutions from the Northern Finance Association Meetings.

Gottesman’s research interets include financial markets, financial intermediation, and corporate finance, and he publishes articles on finance and economics topics in academic journals. Gottesman has also coauthored a book titled Insurance Logic, the second edition of which was published in 2004.

Lall Ramrattan, Ph.D. received his Ph.D. from the New School University in 1986. He currently teaches Economics at the University of California, Berkeley. He has published many articles in professional journals on a variety of topics. Forthcoming books include New Frontiers in Economics, with a Foreword by Paul A. Samuelson, which will be published in 2004 by Cambridge University Press; and Reflections of Eminent Economists, with a Foreword by Kenneth Arrow, which will be published in 2004 by Elgar Publishing Co. The two volumes were co-edited with Michael Szenberg. Currently, his interest is in the application of economic models to industry and country studies.