The Five Laws to Foresee the Future.
12 Paradigm Shifts That Will Happen in the Future of Human Society 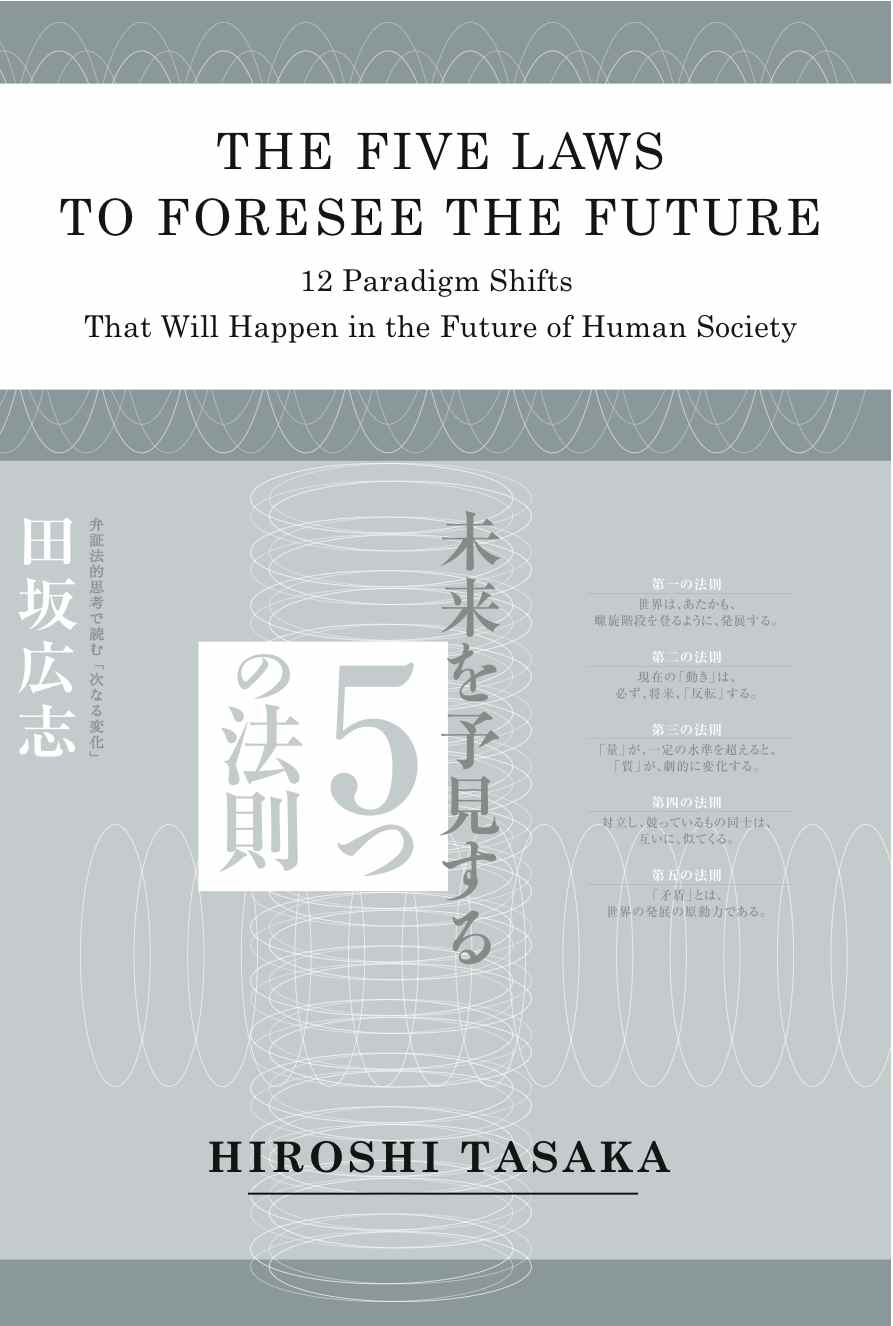 What will Happen in the Future of Human Society?

In the age of discontinuity, non-linearity and acceleration,
Can we predict the future?

The answer is No.

We cannot make quantitative prediction or concrete prediction.
But we can make directional foreseeing or macroscopic foreseeing.

Then how can we foresee the future?

By using “Dialectic Thinking”,
We can foresee the future.

Dialectic Thinking is the way of thinking
Based upon the Philosophy of Dialectic.

The essence of the Dialectic Philosophy is
The Five Laws of Dialectic as follows.

The First Law
The Law of Development through “Spiral Process”
The world develops as if it were climbing a spiral staircase.

The Second Law
The Law of Development through “Negation of Negation”
Current “trends” always “reverse” themselves in the future.

The Third Law
The Law of Development through “Transformation from Quantity to Quality”
When “quantity” exceed a specific level, the “quality” changes dramatically.

The Fourth Law
The Law of Development through “Interpenetration of Opposing Objects”
Things which oppose and compete each other come to resemble each other.

The Fifth Law
The Law of Development through “Sublation of Contradiction”
Contradiction is the driving force for the development of the world.

Then what kind of future we can foresee
by using Dialectic Thinking?

We can foresee “” Twelve Paradigm Changes” as follows
that will happen in human society in the future.

If you are interested in the Five Laws of Dialectic or
The Twelve Paradigm Changes
That will happen in human society in the future,
You would find very important insights in this book.

Hiroshi Tasaka graduated from the Faculty of Engineering at the University of Tokyo with a Ph.D in nuclear engineering in 1981. From 1987, he worked as a visiting researcher at Battelle Memorial Institute and also at Pacific Northwest National Laboratories in the USA. In 1990, he participated in founding the Japan Research Institute and engaged in “Industry Incubation” as a Chief Strategy Officer. In 2000, he became a Professor at Tama University in Tokyo and teaches students the philosophy, vision, policy, strategy, skills, mind and spirit of social entrepreneurs. Also in 2000, he founded Think Tank SophiaBank, a “Paradigm Think Tank” which mission is to change the “Paradigm of Social Systems” in human society to solve the “Global Problems” and “Frontier Problems” for the society. In order to achieve the mission, SophiaBank forms a worldwide network that connect social entrepreneurs and acts as a “Socio-Incubator” that encourages social entrepreneurs to change old paradigm and to create new social systems. In 2003, he established the Japan Social Entrepreneur Forum (JSEF) under SophiaBank to foster and support social entrepreneurs in order to bring about innovation and change in global society. In 2006, he was nominated as a member of “US-Japan Innovators” by the Japan Society in New York. Also, he was invited as a member of the Global Agenda Council, advisory board of the World Economic Forum (Davos Meeting) in 2008.

Tasaka is a Philosopher as well who has put forward a wide range of ideas and theories: the philosophy of life and work, of management and business; corporate and industrial strategies, social and government policies, a vision of the Internet revolution and the knowledge society, and also the paradigm shift in knowledge in human society.
He is the author of more than 50 books, including The Age of Paradigm Shift; Dialectic Thinking to Foresee the Future; Wisdom of Complexity; The Gaia Perspective; Ecology of Mind; What Will Happen in the Knowledge Society?; A New Paradigm of Strategic Thinking; Management of Complex Systems; Management of Tacit Knowing; The Evolution of The Professional; The Philosophy of Work; Why Do We Work?; What is the Reward of Working?; What is Success in Life?; and To the Summit – Why Should You Embrace an Ideal in Your Heart?.