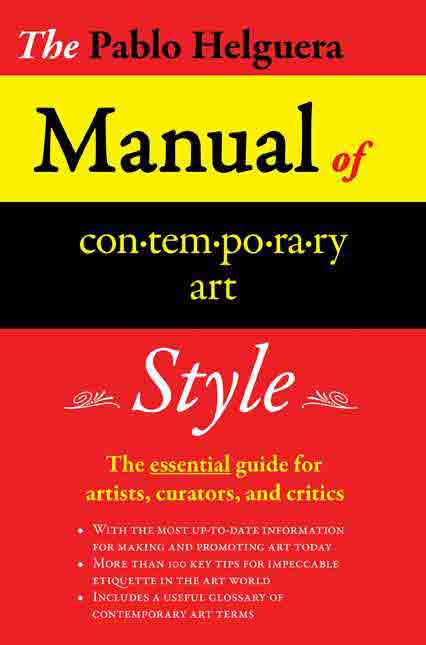 BUY IT AT: Amazon and B&N Also Available for iPhone iPodTouch

" The Pablo Helguera Manual of Contemporary Art Style, a unique book on the social dynamics of today’s artworld. Printed originally in Spanish by Tumbona Ediciones, the book is in finally available its English version.

Manual of Contemporary Art Style offers an ironic, insightful, and humorous look at the inner social workings of the contemporary art scene, while functioning at the same time as an accurate and useful etiquette manual for understanding the intricate professional dynamics that take place in the art community today.

The Manual poses daring questions such as: Should one sleep with an artist whose work one does not like? What should one say to close friends when they exhibit bad work? How should one approach a dealer tastefully?  How can one escape from a never-ending video installation while in the presence of others?

Using the traditional language of old-time etiquette manuals, Helguera describes and addresses social situations in the art world that are familiar to all those who are involved in it, and yet  which are barely discussed beyond casual conversation. The Manual thus becomes a portrait of today's contemporary art scene, and the strange and paradoxical contradictions that it lives between fostering its image of radicalism and its need to cater to the financially conservative art market that sustains it.

The  Pablo Helguera Manual of Contemporary Art Style is an insightful and entertaining read both for the art specialist and the novice.

Pablo Helguera is a visual artist living in New York. His work, which ranges from performance art, video, and public art, often involves historical research, fiction, humor, and criticism. Previously, Helguera worked as Senior Manager of Education of the Guggenheim Museum in New York, as well as many other museums. He has described the book as follows: "The Manual is an autobiography of sorts, documenting the anecdotes, behind-the-scenes maneuvers, and interactions that I have observed in the art world over the years.  But it also seeks to show the ways in which we all conform to regulated patterns of behavior in order to be admitted into the high spheres of the contemporary art scene. In the art world, we all are performers, and here I tried to describe some parts of our unspoken script".

Pablo Helguera has presented his work at the Museum of Modern Art, New York, El Museo del Barrio, the Bronx Museum, the Havana and Liverpool Biennials, and in many other museums and galleries internationally. He worked as head of public programs at the Guggenheim Museum in New York (1998-2005). He is the recent recipient of the Creative Capital Grant, for which he presented his project The School of Panamerican Unrest (www.panamericanismo.org), a ground inter-continental journey from Alaska to Tierra del Fuego. He has written a dozen plays, monologues, and performances, including The Circorama of Operistic Nostalgia (1994), The Memory Palace of Matteo Riccci (1995) The Palace (and other Pilsen Ghost Stories) (1996), From the Vocal Archives of Florence Foster Jenkins (2000), Mock Turtle (2001), Theatrum Anatomicum (or, How to Dissect a Melodrama) (2002), Parallel Lives (2003), The First  Imaginary Forum of Mental Sculpture (2004) and The Foreign Legion (2005). He is also the author of the novella Babel (1993), and the essay Endingness (2005). He is represented by Enrique Guerrero Gallery in Mexico City.

You’ll find all sorts of things in Helguera’s Manual that aren’t in any other book: the difference between an A-level artist and a B-level artist, how to cure the dreaded “festivalist syndrome,” how to keep your conviction that you’re the greatest artist in history, and whether it is ethical for a critic to sleep with an artist whose work she doesn’t like.

This is a very funny book. It masquerades as an old-fashioned guide to the manners and foibles of the art world, written by a savvy twenty-first century artist. But it is clever, and has many voices: snide like Miss Manners, sweet and impeccable like Emily Post, hapless like Bouvard and Pécuchet, earnest like an Art World for Dummies, sharp like Swift’s encyclopedia of clichés, sneaky like David Wilson’s fabricated documents for the Museum of Jurassic Technology. Helguera’s tongue seems to be in his cheek—that’s what you’re meant to think—but he is often very helpful, and everything he says is true.

--James Elkins, author of  How to Use your Eyes and Our Beautiful, Dry and Distant Texts: Art History as Writing.

In the process of writing the rules of the game, Helguera also skewers its participants.

…An artist who dares to look at the big picture ...[Helguera] has a savvy understanding of art history and art audiences, enough to know that a little humor and a bit of irony are sometimes the best tools in an artist arsenal.